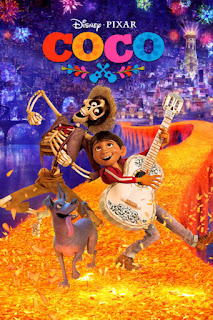 
Who would I recommend this to?
Everyone.

What is this about?
Miguel's family hates music, but he wants nothing more than to be a musician! Then hijinks ensue during the day of the dead, getting Miguel sent to the Land of the Dead to find his great great grandfather!

When would be a good time to watch this?
Anytime you want a fun movie, or maybe a good cry.

Where does it take place?
Mexico and the land of the dead! So pretty!

Why did I decide to watch this?
It's Pixar, duh. I own it and it's on Netflix and it took me forever to finally get to it.

How did I like this?
Well, it continues Pixar's streak of making me cry like a baby, so there's that. I was getting worried though, because it took until the very end and then hit me hard.

The animation is super duper gorgeous. The land of the dead is really something special.